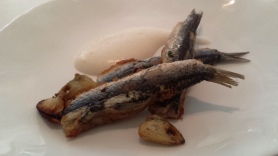 Bilbao – When we visited the Basque country end of June we knew we will go to the Guggenheim museum and maybe also eat in the restaurant there. In the end we went to Guggenheim twice and had a 3 hours lunch in the Nerua. The whole building complex is just overwhelming!

We went once to see Jeff Koons and the other day we went to see Jean Michel Basquiat (exhibition just started the week we were there). Both exhibitions were just great and touching.

But now more about the Nerua.
We were welcomed by the staff very friendly and led directly to the open the kitchen to greet the chef Josean Alija (1 Michelin star and several awards, in 2015, Nerua has been included for the first time in the World’s 100 Best Restaurants list by the prestigious magazine Restaurant).
He explained his concept and his passion about the products (most local and seasonal).

We had the 9 courses lunch menu and were amazed by the quality of the food. The wine pairing was great (and also the story the sommelier had to tell us about all the wines….) although one of the white wines was a bit peculiar for our taste.

The atmosphere is white, clean, chic and reduced to the max, to put the spotlight on the food. Two tables next to us sat a group of people that seemed to be related to Basquiat. As we knew from the exhibition that he had two sisters, we soon found out that it had to be them. Later other customers of the restaurant approached them to express their dedication to Jean Michel Basquiats art work.

It is definitively worth going – although it strains your wallet quite a bit….